Friendly communication with the elderly

Recently I went to visit a friend who lives in a large gated neighborhood with lots of elderly residents (her retirement communuty). The parking lot by her building was virtually empty so I didn’t bother paying attention to the APARTMENT 204 sign that sat in front of the space I chose. There were like forty empty spots in the lot so I guess I figured that if the resident of Apartment #204 returned, they could just park in 205’s spot and if 205 came back early, GOD FORBID, they could park in 206’s.

After a delightful visit with my friend I returned to my car about two hours later and found this document on my window shield:

Why not include a photo? Then I could have put a face to the parking space I was stealing.

I half expected to look up and see an old guy waving at me with a frown on his face, but there was no one in sight.  Which made we wonder why this note, which contains absolutely no new information other than the fact that resident #204 has paper and the ability to write, was left.  I wasn’t sure how to respond to this redundant announcement but I didn’t want to be rude and ignore it so I turned around, held the note up, and yelled “I’m sorry!” to the building.

The deafening silence that followed left me unsatisfied with my apology. I just had no way of knowing if Resident 204 was actually watching or if they were busy, say, writing notes to the other strangers that walked in and out of their life, stomping all over their territory and parking their cars wherever they want like we’re living in a goddamned anarchy!!!! Or they could have been eating dinner (by this point it was nearly 4 o’clock).

In the end, I settled for a note left on their sign, which I’m sure fell off and blew after away seconds after I left. 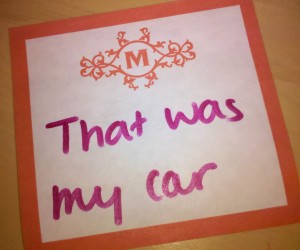 Or maybe 204 actually was watching and waiting for my response, in which case I hope my message gave them the closure they felt they needed. Digestion can be hard enough at that age without the added anxiety of wondering if a stranger learned their lesson! And I’m just thankful that I was taught mine by someone as wise, bold, and, let’s face it – artsy – as Resident #204 (the calligraphy on that note was siiiiiiiick!)

All in all, the afternoon made me grateful for the people I know. Stuff this exciting never happens when I visit my friends that are under age eighty.

Almost mistook this for my own bottle of work alcohol! <3

“That’s weird, it smells like alcohol. Oh well. In an unrelated question what you drinking, Beth?” 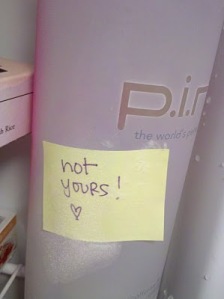 Found in the office freezer next to about twenty eight Healthy Choice frozen dinners. I had no idea that the people I work with are such boundless alcoholics they need a sassy little reminder to prevent them from taking shots of vodka on the job.

To answer your question: not terrific

Starbucks has so cleverly hidden their IMPORTANT SAFETY RECALL message behind another sign.  No one will ever think to check behind it.

How long she’s been at it

She Wants a Blog
Blog at WordPress.com.